Posted on August 9, 2015 by www.pineneedlesandpapertrails.com

Elderly watchmaker, Casper ten Boom and his middle-aged spinster daughters, Corrie and Betsie, lived a quiet life in Haarlem, Netherlands at the time of the Nazi invasion in 1940. The ten Booms joined the Dutch resistance and built a hiding place in their home for Jews sought by the Gestapo, a stop on a twentieth century “underground railroad”, manned by Gentiles who would not bow to the occupying force.

It is estimated that 800 Jews were housed, fed and moved to safety through this family’s efforts, until they were betrayed in February 1944 and subsequently imprisoned, first in a local jail and ultimately in concentration camps.

Corrie ten Boom survived Ravensbruck and told her story in gripping detail in The Hiding Place, co-authored by Elizabeth and John Sherrill, first published in 1971 and reprinted in 2006 by Chosen Books in a 35th Anniversary edition.

Casper ten Boom, Corrie’s father, was a man of 84 at the time of his arrest by the Gestapo. He was truly remarkable – a compassionate and uncompromising Christian who took heroic measures to save Jews in the face of great pressure to mind his own business.

Corrie recounts this excerpt of the interrogation her father’s underwent after his arrest:

“The Gestapo chief leaned forward. I’d like to send you home old fellow,’ he said. ‘I’ll take your word that you won’t cause any more trouble.’

I could not see father’s face, only the erect carriage of his shoulders and the halo of white hair above them. But I heard his answer.

‘If I go home today,’ he said evenly and clearly, ‘tomorrow I will open my door again to any man in need who knocks.’” (The Hiding Place)

In The Hiding Place, heart wrenching reality mixes with hard won faith to inspire the reader.

The State of Israel honored Corrie ten Boom for service to the Jewish people by issuing her an invitation to plant a tree in the Avenue of the Righteous at the Yad Vashem Holocaust Museum near Jerusalem. http://www.yadvashem.org/yv/en/righteous/

A worthwhile tribute to Corrie ten Boom is found on the following blog: https://unexpectedincommonhours.wordpress.com/2015/04/16/corrie-ten-boom-i-remember-you/

This amazing survivor traveled the globe speaking about God’s love and the power of forgiveness, often accompanying Dutch countryman, Brother Andrew whose story is told in God’s Smuggler also co-authored by Elizabeth and John Sherrill. She authored more than 25 books before her death on April 15, 1983 at the age of 82.

In the final pages of the Hiding Place, Corrie issued this challenge and encouragement:

“And so I discovered that it is not on our own forgiveness any more than on our own goodness that the world’s healing hinges, but on His. When he tells us to love our enemies, He gives along with the command, the love itself.” (The Hiding Place)

Keeping the inspiring story alive in the 21st century, volunteers give free tours of the ten Boom house in Haarlem, Holland only thirty minutes by train from the Anne Frank house in Amsterdam.

Posted on January 6, 2013 by www.pineneedlesandpapertrails.com

Recently, I found “a window into reality” by means of the novel The Guernsey Literary and Potato Peel Pie Society,  a heart-warming story written in epistolary form (written correspondence between the book’s characters).  The setting is the Channel Island of Guernsey immediately following World War Two.  Novelist Mary Ann Shaffer, an American from Martinsburg, West Virginia, first encountered Guernsey on a vacation trip.  She fell in love with its charming beauty and discovered that, shockingly, this small piece of British soil was occupied for five horrific years by the Nazis.

Shaffer thoroughly researched this dark period in the history of the Channel Islands and the result is this eye-opening account of the oppression that the Guernsey islanders experienced under the cruel hand of the Third Reich.   Mixed in with the bitter tragedy is plenty of humor, however.  The Guersney Literary and Potato Peel Pie Society (GLAPPPS) began as a cover for an illegal pig roast which some islanders didn’t want the Nazis to discover.

The plot develops as the main character, Juliet Ashton, known in London as a light-hearted journalist, seeks a new book idea.  Juliet has just experienced her first literary success with the publication of Izzy Bickerstaff Goes to War (a collection of her weekly newspaper columns written during the war). What begins as a self-centered career opportunity to observe and write about the Guernsey islanders becomes much more as Juliet’s heart is drawn irresistibly into the lives of the unlikely comrades of the GLAPPPS.

The book includes letters from numerous members of the Society to Juliet describing the wrenching deprivation, starvation conditions, and mistreatment during the occupation.  The quirky characters and sense of community pour off the pages of the letters, as do the sweetness of loving sacrifice and romance.

Author Mary Ann Shaffer lived much of her life as a librarian and editor.  This is her first  (and last)novel.  The book still needed revisions when Mary Ann became terminally ill.  Annie Barrows, the author’s niece, stepped in to finish the manuscript for the publisher.  Sadly, Ms. Shaffer passed away in February 2008 at the age of 73 – able only to see the publication of her novel in England; not in the United States.  Ms. Barrows describes her aunt’s choice of the letter form for her novel:

“My aunt thought it would be easy and those are the types of books she liked to read.  We loved reading people’s letters and diaries.  I think we were born snoops.  And of course, writing the book did not turn out to be easy.” (The Journal [Martinsburg, West Virginia] August 2008)

Another notable epistolary novel is The Screwtape Letters.  Author C.S. Lewis masterfully composed letters from the fictional demon “Uncle Screwtape” to his nephew “Wormwood”.  Screwtape  offers diabolical advice on how to tempt Wormwood’s human assignment. Lewis writes letters solely from Screwtape’s perspective and cleverly alludes to what Wormwood has written.  In 2009, Focus on the Family produced a wonderful Radio Theatre edition of The Screwtape Letters with the vocal talents of Andy Serkis (Gollum). 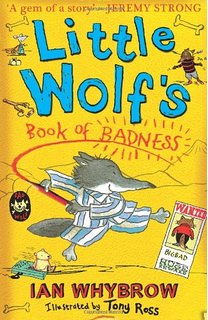 On a more light-hearted note, the children’s book, Little Wolf’s Book of Badness (the first book in a series by Ian Whybrow) is a collection of hilariously misspelled and illustrated letters home from a well-behaved little wolf cub who is sent away on purpose to become “bad” – as wolves should be – at Cunning College for Brute Beasts under the tutelage of Uncle Bigbad.

In addition, non-fiction books that are records of written correspondence are another excellent way to see into the lives of people.  I recently re-read a novel published in 1970 which chronicles twenty years of actual correspondence between New York screenwriter Helene Hanff and the London antiquarian bookstore staff members who helped her find out-of-print books.  84, Charing Cross Road is full of humor and pathos.

My renewed interest in epistolary books also reminds me to read my Bible epistles as letters.  They were composed to someone  and I dearly wish we had access to some of the answers the biblical authors must have received.  For example, the apostle Paul’s response from his letter to the Philippians (Chapter 4) may have run something like:

“Dearest Paul, Euodia and I have made up and have started a weaving business together… Love, Syntyche”.