Posted on May 30, 2015 by www.pineneedlesandpapertrails.com 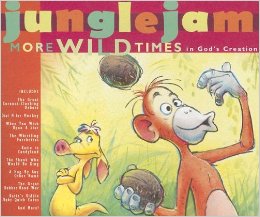 Laughter is good medicine and kids stay so healthy because they take huge doses of it daily. The under-marketed audio series I recommend in this blog post offers a cure for adults as well, since the stories are designed to delight young and old. Listen with the young people in your life and have a blast as you LOL.

“Jungle Jam and Friends” began as a radio program, with humorous plots teaching fundamental life lessons such as sharing, friendship, procrastination, and facing fear. About twenty years ago, creative giants Phil Lollar (of “Adventures in Odyssey” fame), Nathan Carlson, David Buller, and Jeff Parker collaborated in an effort to create colorful audio stories of an imaginary jungle world populated by animals with memorable voices and personalities which first aired in 1993.  Jean-Claude the flying squirrel, Millard the Monkey, Gruffy Bear, and Sully the Aardvark are all voiced distinctively and with great wit.

A parallel set of characters and stories is set on Razzleflabben Island to which human children, Marvy Snuffleson and his sister Katie, are sent to learn life lessons the funny way with the help of the island’s endearing and whimsical inhabitants, the Razzleflabbens. Our family listened to every Jungle Jam story and we are still quoting favorite characters years later. An added bonus in the Jungle Jam experience is the musical contribution of songwriting team Buddy and Julie Miller.

Jungle Jam fans wrote in the website guestbook: “My favorite character from Jungle Jam and Friends the Radio Show is Millard J. Monkey. He is to Jungle Jam what Daffy Duck is to Looney Tunes: egotistical, self-absorbed, and hilarious. I love how he makes such a good foil to the mild-mannered, sweet-natured, naive Sully the Aardvark.” Rebecca “My favorite character is Sully – his funny dialogue with the other characters, his naiveté. We love “Where the Bears Are”. My husband & I laugh a lot at that episode and are always taunting each other Gruffy/Sully style when we play a game (“You’re goin’ down, Bear”, “You’re gonna cry in your lemonade, Aardvark”). We’ve listened to Jungle Jam in the car for ages, but now that our son is old enough for the stories, we listen to them as part of bedtime routine.” Tammy

It is my understanding that the stories are only available now as downloads online, although some gently used CD sets may be still floating around for purchase. These stories are a must for children 4-12 years old and their parents and grandparents. I can not comment on the quality of the books that were produced after the audio stories, since we never read them. Suffice it say that the vocal talents and witty dialogues of the audio stories must not be missed! My favorite stories are: “ Sully Makes a Friend”, “Pogo A-Go-Go & The Terrible Truth About Lying”, and “The Great Coconut Clunking Debate”.www.fancymonkey.com

In my opinion, the best endorsement of this audio series comes from Katie, a mom of four active boys, who says: “…my favorite thing is that no one is fighting or talking because they’re listening to Jungle Jam!”

I am hoping against hope that my granddaughter will love these stories too, when she is old enough to listen.