Are You Ready to Be Scared? Fantasy by Jonathan Stroud

Posted on September 3, 2015 by www.pineneedlesandpapertrails.com 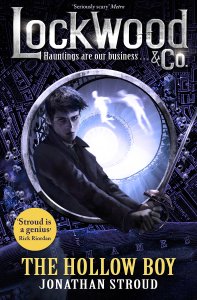 “Between the ages of seven and nine I was often ill, and spent long periods in hospital and at home in bed. During this time I escaped from boredom and frustration by reading furiously: books littered my bedroom floor like bones in a lion’s cave. I tended to enjoy stories of magical adventure more than ones about real life – I think this was because they provided a more complete escape. Around this time I fell in love with fantasy.” Jonathan Stroud (www.jonathanstroud.com)

Jonathan Stroud is a wonderful wordsmith and a skilled world maker. His two fantasy series, Lockwood & Co. and The Bartimaeus Sequence, employ supernatural beings that frighten and intrigue the reader.

I’ve read The Screaming Staircase and The Whispering Skull in the Lockwood & Co. series and am looking forward to getting my hands on the third novel, The Hollow Boy, which has just been published.

Mr. Stroud uses his home turf, the City of London, as his setting, but has masterfully altered it to create a fantasy world in which “The Problem” has occurred, an invasion of ghostly hauntings that frighten and often kill the human residents. A culture of children and teen warriors has arisen to do serious battle with these malevolent apparitions.

Anthony Lockwood, Lucy Carlyle, and George Cubbins make up the members of the maverick agency Lockwood & Co. that dares to venture out at night to solve ghostly hauntings without the supervision of adults. Lucy, a teen girl with the dubious gift of hearing ghosts joins in the adventures of the two boys who inhabit a rambling three-story house in the city.

I am not a believer in ghosts, but I found myself irresistibly pulled into the world Mr. Stroud created.  Swords at their sides, intrepid “agents” risk their lives locating the source of the ghosts – often a burial ground, beloved object, or murder site. Ancient wrongs are righted, people are protected, and human evildoers are unmasked. Weapons that work on the supernatural creatures include salt bombs, magnesium flares, iron chains, and silver rapiers.

I was introduced to Jonathan Stroud’s writing in his earlier New York Times bestselling series: The Bartimaeus Sequence: The Amulet of Samarkand, The Golem’s Eye, Ptolemy’s Gate, and The Ring of Solomon. 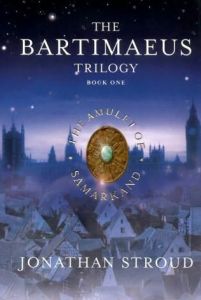 In the Bartimaeus books, the people who sought to harness the power of demons have become evil themselves (which is a fair warning to resist summoning evil spirits). These demonic slaves nurse an abiding hatred for their human masters and ceaselessly seek to escape – to destroy, kill, and then return to their hellish home. Nathaniel, an inexperienced, yet arrogant magician’s apprentice, encounters Kitty, a member of the Resistance, and finds himself rethinking his role in the governmental system that has placed power in the hands of corrupt officials who use it to further their own selfish interests.

Both the Lockwood and Co. Series and the Bartimaeus Sequence contain story lines and world building that are based on a view that the occult world, be it demonic or ghostly, is dangerous and opposed to the wellbeing of humans.   This was comforting to me because I threw away my ouija board as a teenager, and as an adult, continue to have nothing to do with contacting the evil spiritual world. I would like to point out that the demon Bartimaeus is a sympathetic character that incongruously develops some concern for his human counterparts. This puts him in an odd “good demon” category.

As a fantasy author, Mr. Stroud never opens a window into the Heavenly realm, nor does he bring in the helpful services of angels or the power of a benevolent God to work on behalf of the beleaguered people in his stories.  It is best 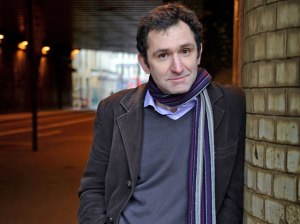 if the reader enters Mr. Stroud’s fantasy worlds without expecting a Christian worldview.  Taking that into consideration, these two series are delightfully scary, interesting and penned by an excellent storyteller.